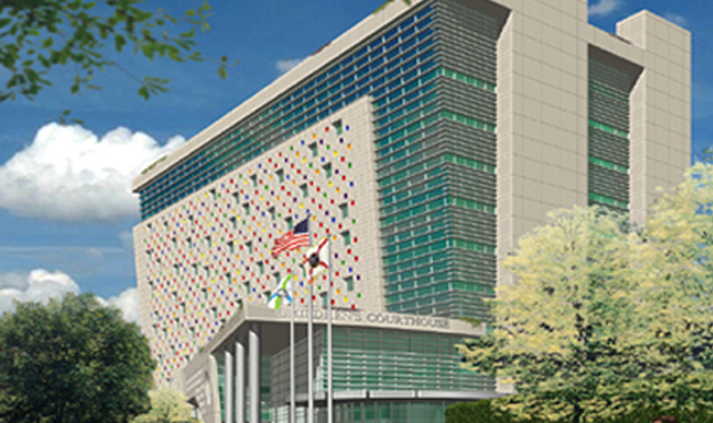 Because high-rise structures “shelter” the courthouse on three sides, only the west end of the building is considered vulnerable to possible aerial terrorism. The architectural and structural design teams worked jointly to harden this façade of about 100 feet by providing a solid concrete wall. This element provides protection from terrorism in the west-east direction and also provides lateral stability from hurricanes in the north-south direction.

After an economic evaluation was performed, the post-tensioned system was chosen as the most cost effective. The post-tensioned flat plate also appealed to the architect due to the shallowness of the system and the ability to provide higher ceilings for the court rooms. At the South, the building features an exterior pre-cast wall that tilts-up and away from the building in its upper floors. The post-tensioned slab cantilevers to support this pre-cast wall progressively increasing its cantilever span to a maximum of about 15 feet. The structure makes provisions to support a green roof over the building’s main roof and another over the roof covering the 3-story atrium at the entrance.